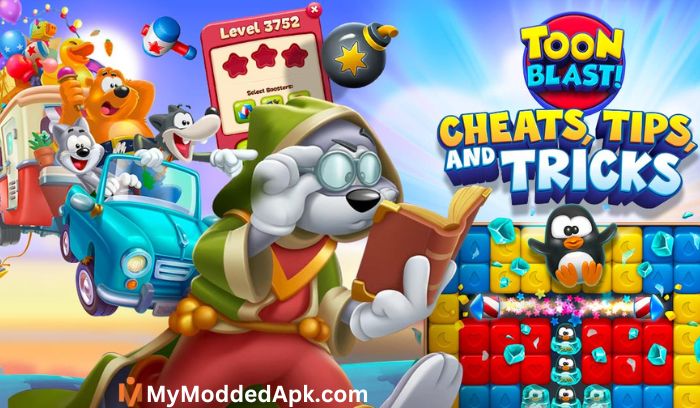 Toon blast cheats: The Toon Blast gameplay is easy and enjoyable. You are given a collection of boxes in various colors at the beginning of each level. Other things and barriers are alongside it, such as balloons, crates, and more. Your objective is to remove these barriers. How do you do this, though? Tap the identically colored boxes that are next to one another.

Additionally, this will destroy any nearby obstructions. Simple? But you’ll be surprised at how quickly this becomes difficult.

In this article, we will discuss some of the top Toon Blast cheats, tips, and tactics to help you have a better gaming experience. Furthermore, the fact that these hacks don’t require any downloads or installations makes them reasonably practical. It would be best to learn Toon Blast cheats and strategies to succeed at the game. They will make it easier for you to complete each level, but they will only be helpful to you if you know how to use them.

Just to set the record straight, cheating in games is never a good idea. Cheating can lead to a ban on your account, game malfunctions for you, and other problems that could ultimately spoil the game. Instead, we’ll concentrate on advice and techniques to help you succeed while abiding by all laws.

Toon Blast doesn’t have any well-known cheats, so you are not likely to be missing out. Let’s start with some advice

After eliminating a group of five identical-colored blocks, you’ll receive the rocket booster. One of the blocks will turn into a Rocket as soon as you tap on that cluster. According to how they were developed, this can be either oriented horizontally or vertically. Rockets fired vertically or horizontally will clear a column, not a row.

Tap a cluster of 7 identically colored blocks to create a bomb. Bombs have additional strength because, when tapped, they can remove all nearby blocks. More precisely, a circle of 8 blocks.

Disco Ball: Obtaining the Disco Ball requires you to construct it by destroying a 9-block cluster, which makes it more difficult. Nevertheless, it is worthwhile because it is the most potent booster available. It can remove all identical-colored blocks from the board as a whole.

Find a technique to get combos when you need to get rid of a bunch of bricks that are of the same color! If you cannot perceive any combinations, try expanding smaller groupings to create more valuable combinations. If you have multiple groups of varieties lower on the screen, you can create combos at the top to prevent changing the bottom of the screen. You’ll be more effective long-term if you plan your actions!

Try to do more combos.

Combos are an excellent gameplay technique, especially toward Toon Blast’s beginning. When five or more blocks are combined, you can create combos that help you clear any target. You must consider adjacent blocks to complete this and connect smaller groupings to build larger ones.

Even though these combos are advantageous, DOUBLE COMBOS are also available in the game and are even more powerful. Just be sure to pick combos that will be advantageous to you! As mentioned above, you can combine any combo with another to produce double combinations. Combos are often instrumental, so you should be careful to save them up.

To remove more blocks with a single tap, try the following combinations.

Rocket & Rocket: A two Rocket combo clears both a row and a column at once.

Rocket & Bomb: This combination is nearly identical to Rocket & Rocket but with added power. A single blast clears three (3) rows and three (3) columns.

Bomb and Bomb: Another effective combo that removes a lot of blocks is bomb and bomb. It clears the vicinity much like a typical Bomb. However, it destroys twice as much space as a standard bomb does, rather than merely an 8-block radius.

Disco Ball with Bomb: This combination is considerably more potent. The blocks that are the same color as the disco ball are turned into bombs by this combination. By doing this, many blocks and impediments are removed by a cluster of explosions.

Disco Ball & Disco Ball: The Disco Ball 2x is Toon Blast’s most potent combo. With just one blast, this combo removes all of the tiles. As a result, it will assist you in quickly finishing the level. It’s possible to see it as a charming nuclear explosion.

Finally, make an effort to take advantage of every chance to earn rewards and boosters. Boosters are excellent tools, especially as you progress through the levels. As the goals get more challenging, you may employ them more frequently. You will then see that your supply of boosters is depleting swiftly.

So keep in mind to stock up on Boosters whenever you can. Grab Daily Bonuses and open chests to accomplish this.

Additionally, stars are required to open chests. Every game allows you to accumulate these. Most of the time, you will get three stars after finishing a level. That is, assuming you could complete the level in the fewest moves possible. However, the number of stars you can get decreases as you utilize more maneuvers. You can open chests to get gold, boosters, and lives after you have a certain amount.